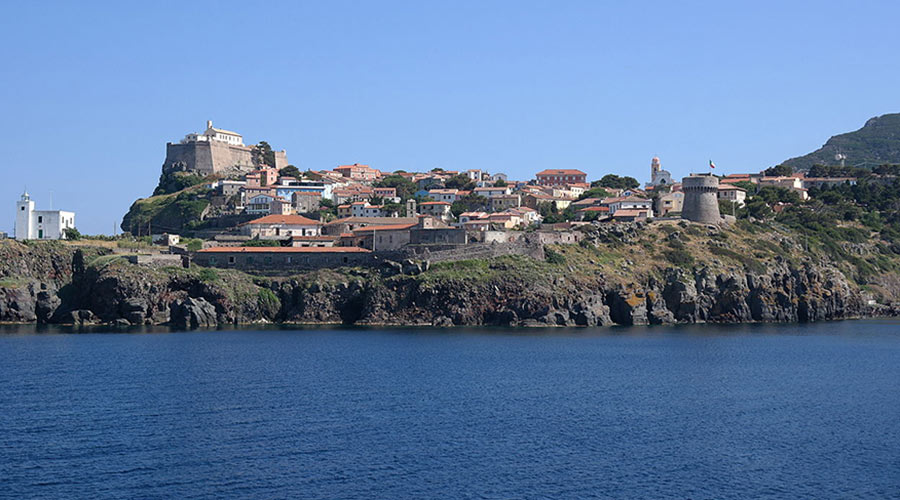 Is a island with local aromatic herbs and surrounded by a limpid sea, a real mediterranean pearl. The geological aspects of the coast and of the inland, the colour and the composition of the rocks, the accumulation of the ashes and lapillus bear witness to its volcanic origin. It is probable that its name comes from the etruscan “carpa” : stone, a word which comes from the archaic Greek language “Kalpe” : sepulchral stone. Therefore the island’s name passed from the etruscan “isola pietrosa” (stone island) to the roman “Capra” (Goat) from which comes “isola delle capre” (island of the goats)and therefore “Capraia”. The island is one of the seven sisters of the Tuscan Archipelago, the third in sizes after Elba and Giglio. It is about 8Kms from Punta della Teglia to Punta dello Zenobio long and is 4 Kms wide. It has got a surface of about 20 square Km. and with a 30kms coast. The small port is full of boats of every kind and the small and only boot topping isthe shelter for dozens of rubber boats belonging mostly to skin divers who love these crystal waters rich in life and oddities. Its depths give shelter to numerous living species which fascinate the seabed of Capraia , rich also in archeological ruins. The vegetation is flourishing and full of Mediterranean species. It fought against the volcanic nature but at the end it got the better as you can see from the lively and vegetable cover. The landscape created by the vegetation with the help of the wind are really spectacular: thousand of daises, asphodels, the expanse of sea cistus with white flowering, the perfumed expands of “elicriso” and the plans with heather, strawberry-trees, myrtle and oleanders. There is also a small lake (Il Laghetto or Stagnone) . A legend tells that the ferocious Saracens put ashore in order in order to hide the treasure plundered in the Archipelago. But many of them didn’t come back to take the spoil. That is why once a convict found some gold coins while searching in the rocks. The green Capraia with its coloured coast , with its small port and with the unmistakable scent of lentisk is always the same during the years. Even in August , when the port is completely full, the tourism is not nosy: here you breathe pure sea air .Every day the boats travel through the small port , a big population of sailors, skin divers and simple bathers who want to spend their holidays in bathing customs.