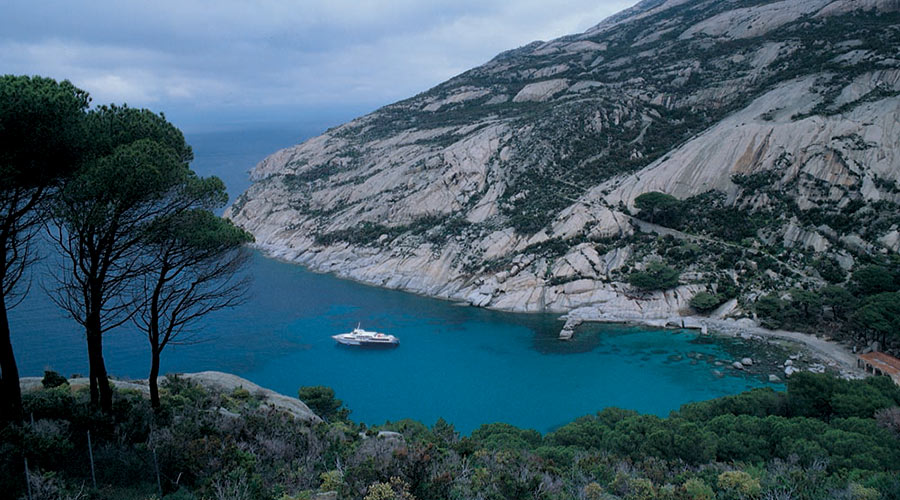 A wild and uninhabited island, covered with Mediterranean bush is an important shelter for birds of passage. It's about 10 square Km. wide and is one of the most wild island of the entire Tuscan Archipelago and the most far from the coast . The island of Montecristo is composed of grey-pink granite , has got a wide, low pyramid shape and is rich in vegetation. Its inhospitable aspect kept the people away from the island during the centuries until in the V century when monks and hermits started doing a part of the territory hospitable. When you get ashore at Cala Maestra it is possible to A see the only building of the island Villa Watson-Taylor where there are the sole trees of the all island. As for the fauna the wild goats are the rulers of the area , there are in fact about 400-500 animals probably coming from Minor Asia and carried there perhaps by the Phoenicians but now they are wild again. Their voracity has changed gradually the original Mediterranean bush. Cala Maestra: Open on the north west side , it is the only inlet of the Montecristo where you can get ashore quite easily, even if in case of storms the exposition to the winds of the first quarter forces the fishermen close to the cliffs. The deep valley is one of the most wide area of the island and is inhabited permanently. Here live the guards and during the summer some foresters too. Cala Maestra is dominated by the regular architectural mass of the ex Royal Villa built around the half of the last century by the English Giorgio Watson Taylor, who was the owner of the island. From Cala Maestra , sideways the heliport, begins a steep muletrack which leads to the ruins of the ancient monastery situated in aplace named Il Convento (it takes little more than an hour on foot). How to get to Montecristo Island As for the government it belongs to the Elba island from which it is 22 nautical miles away. If you want to go to Montecristo where live only two people, it is necessary to obtain an authorization by the Ministry which usually issues it only for university studies or research's reasons.