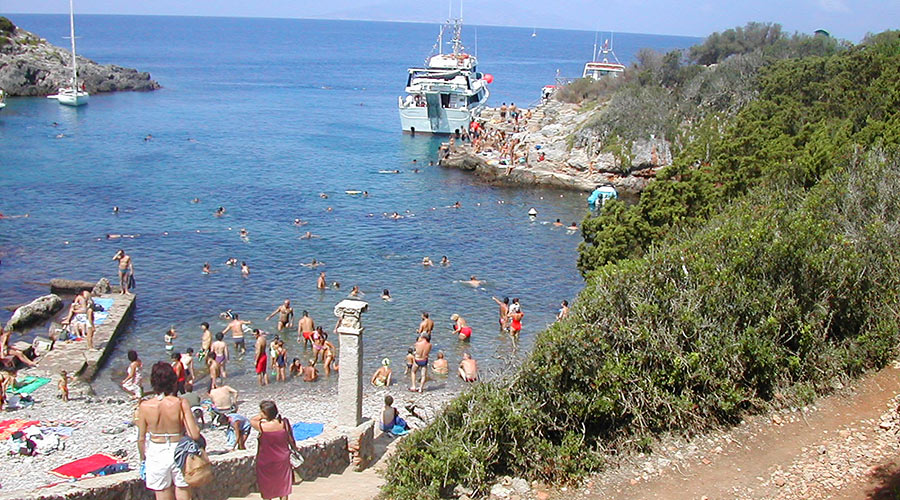 It stands aside compared to the other islands of the Tuscan archipelago but thanks to its geographical distance it is a very special place, perhaps unique and inimitable. Giannutri is a very small paradise , it is 500m .large and more or less 5kms long, a beautiful walk. It is the ideal place for excursions and is attended especially by ski divers charmed by its depths. In the past Giannutri had already charmed the Romans who built a port and beautiful patrician villas. The sea is still keeping wrecks of their ships. Among the legends on the Archipelago's islands , there is that telling of 2 ghosts which still today wrap up the half moon shaped island. It is said that to the death of Gualtiero Adami, the garibaldian captain, son of a minister of the tuscan government of Guerruzzi, who lived since 1882 for 40 years in Giannutri, his wife wouldn't leave the island and went crazy. She became a wild creature and it is believed that she is still a howling ghost . The beauty of its depths and the variety of the ichthyic species give the possibility to do the most beautiful immersions. The depths contain falaises, caves, meadows of Poseidonia, sea fans, sea roses, sea horses, sea stars, corals, sea urchins, dentexes, sargas, sponges but also wrecks. It is possible to meet dolphins, a whale or a turtle too. Giannutri is a real natural place with no beaches but only inaccessible rocks to barefoot. From the main rise the Poggio Capel Rosso, a 85m. peak, you can watch only the sea and no land can be perceived even in the clear days. The silence is broken by the thousand noises of the nature which is here the only actor. Giannutri is a marine park and is controlled and protected by the authorities in order to keep its rich natural patrimony and to avoid the sea and town planning spoliations. The sea area has been split in two levels: The zone 1 is an integral reserve and the zone 2 is a simple protection. Zone 1: - No thoroughfare to motor-boats and no mooring. - No fishing or any other damage to animal or vegetable organisms of the depths. - Allowed admittance to bathers and allowed snorkelling. Zone 2: - No fishing or underwater fishing. - Sport fishing with angling is allowed to the residents while the non residents need the authorization by the maritime authority. Mooring allowed to motor-boats and their roadstead permanency for the night in the areas of Cala Maestra and Cala Spalmatoio.